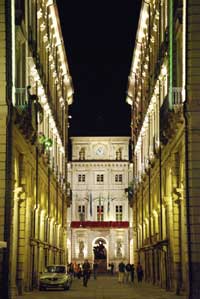 But the artistic period that characterizes most of Piedmont is the Baroque (end '500 until the end of '700), the moment of artistic peak, which contributes, through its dissemination throughout the region, both in its greater cultural unity. It coincides with the rise of the kingdom of Savoy, which began with the Duke Emanuele Filiberto is of central importance for the history of Italy. Wherever they are renewed and built palaces and churches.
The Baroque period is an era full of upheavals. Take over the changes resulting from the colonization of the Americas, successive wars and dynastic struggles, science makes strides with theories and inventions who question the dogmas and certainties on which it was based until then, the vision of the world 's man (you only think about the theories and inventions of Galileo Galilei). Is the time of the Reformation and Counter Reformation, the great absolutist monarchies and a strongly hierarchical society. L 'Baroque art reflects and elaborates the historical upheavals with the abundance of arabesques, rarely straight lines, stucco, decorative tiles and marble to effectively dramatic and gorgeous. Therein we find the artistic research of reconciling these opposites (faith / science, rationality / passions) that maim and simultaneously shape the era.
Baroque marks for more than two especially the centuries 'architecture, but also the' urban (the city of Turin becomes an example of modern urban structure.) Painting and sculpture are integral elements of Baroque architecture. The main customers of palaces, churches, paintings etc.. are primarily the church, the kings and princes. The capital of Baroque in Piedmont is Turin, the venue for the Savoy which manifest the close link between the celebration of the absolute monarchy and the arts.
In Turin and its vicinity are the luxurious royal palaces of the Savoy House, Savoy residences, which are now part of world heritage of mankind 'Unesco. In this magnificent palace the family spent the summer or stay at parties and hunting. Savoy residences represent a complete picture of monumental EU between '600 and '700, symbolized by their style, space and their size the idea of absolute monarchy. The Savoy residences in Turin are: Palazzo Reale, Palazzo Carignano, Villa della Regina, Palazzo Madama 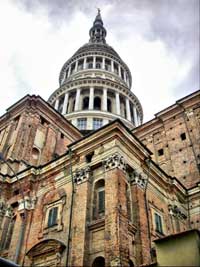 and Casaforte of Achaia, Castello del Valentino. In the Turin area, there are five Savoy residences: the castle of Rivoli, Moncalieri Castle, the residence Venaria Royal Castle and the Castle ducal Stupinigi garlic. In the historic center of Turin are also other examples of Baroque architecture in the Dome of the shroud and that of S. Lawrence, works of one of the most important exponents of Italian baroque, Guarino Guarini, and the Sanctuary of Consolation. Another symbol of baroque Turin is the Basilica di Superga , Set on a hill just outside the city, from which it has a magnificent view over the city. The basilica is home to most of the tombs of the Savoy family.
Architects who have marked the Piedmontese Baroque art are the first important Filippo Juvarra, who worked in various Savoy residences (eg Palazzo Madama, Royal Palace of Venaria) and the Basilica di Superga. He also gave in Turin its modern urbanism. Other Important artists are Ascanio Vitozzi who worked at the central square of Turin, Piazza Castello, and some residences of Savoy, Carlo and Amedeo di Castellamonte design squares, castles and palaces in particular in and around Turin, Guarino Guarini, a famous architect of the Chapel of the Holy Shroud and Benedetto Alfieri, who worked for example at the castle of Govone in the province of Cuneo or the palace Alfieri in Asti.
In province Cuneo are now more Savoy residences, like the Royal Castle Racconigi Pollenzo Castle, the Castle and the Palace of Govone Valcasotto.
Other highlights include the monumental complex of the 7 Sacred Mountains of Piedmont, places of worship and pilgrimage destination until now arisen since the fifteenth century. They, along with the Savoy residences are part of world heritage of UNESCO. Other magnificent examples of Baroque art are the sumptuous Palazzo Borromeo with its spectacular formal gardens, located on Isola Bella (Lago Maggiore), and the Basilica di San Gaudenzio Novara.

The frescoes, stucco and marble contribute to the pomp and splendor of the buildings. They are used to enhance the altars, ceilings, staircases, chimneys of the buildings. Painting and sculpture are integrated to enhance and complement the grandeur of the architecture.
Among the most important baroque artists to be nominated are among others the Mannerist Moncalvo, called the "Raphael of the Monferrato, Claudio Francis Beaumont, who worked at the Royal Palace and the Castle of Rivoli, and also a woman, the portrait painter Maria Giovanna Battista Clementi. Among the sculptors to be mentioned is especially Andrea Pozzo, who has painted among other things, the prospects of the mission church in Mondovi and SS. Martyrs of Turin. Not to be forgotten is the art of the garden, which is ubiquitous and enhances surrounding buildings and residences. Here is the most important architect André Le Nôtre, designer of the Gardens of Versailles and the Royal Gardens of Turin.