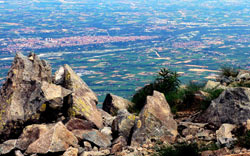 Wedge is situated on a plateau in a triangle, a "wedge" precisely at the junction in the plain between the river Stura and the torrent Gesso. The city is dominated by Mount Bisalta.
The birth of the city was due to its strategic location at the mouth of six valleys communicating with Liguria and France. The first permanent settlements date from the late twelfth century, when it was founded on free city, which lasted until mid - in 1200, when he surrendered to Charles of Anjou. In '300 Cuneo passes to the Savoy. In the next two centuries the city has undertaken in 7 sieges (including 4 against the French), only two of which ended with his surrender.
For centuries it has been locked within its walls, which were torn down only during the Napoleonic occupation. This allowed an expansion of the urban fabric. In the years of World War II Cuneo Cuneo and were the scene of fights and anti-fascist partisans, among them being the hero partisan Cuneo Duccio Galimberti, shot by the Fascists in 1944, in which the city has dedicated his most important square.
Most of the testimonies of the medieval city were erased by the many sieges and destruction they suffered in its history. Today Cuneo shows an aspect largely Baroque '600-'700. Cuneo is an important core agricultural, commercial and industrial center for the exchange of products of the valleys and plains. 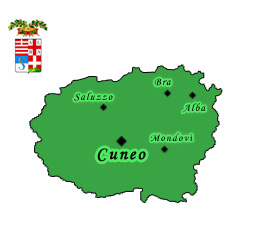 The province of Cuneo