Piedmont lakes offer visitors their beautiful nature, but also art and entertainment. Among 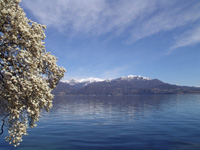 water sports that you can practice there are sailing and windsurfing, rowing and water skiing. The areas of the lakes but also offer other opportunities for sport: horse riding and golf, hiking and mountain biking, hang gliding and paragliding from the mountains.
Be nominated are then the famous tourist destinations in the Lago Maggiore and Lago d'Orta and Orta as Stresa S. Julius, but also lesser-known lakes, but also very beautiful to visit, like those of Candia, the Val d'Ossola and Viverone.

Parks and lakes in Piedmont