Welcome to the province of Verbano-Cusio-Ossola

A Brief History of Verbano-Cusio-Ossola

In 1992 it was established the province of Verbano-Cusio-Ossola. This is the area that stretches between Lake Orta (or Cusio) and Lake Maggiore (or Verbano). The latter is the second largest Italian lake after Lake Garda. The province's economy revolves primarily around tourism, in addition to a still thriving mining industry (granite). This area is beloved by tourism 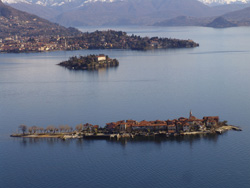 international since the age modern, in which great poets like Flaubert, Dickens and Stendhal exalted the beauty.

The shores of the lakes were already inhabited since prehistoric times. Especially on the banks of Lake Maggiore it settled the important prehistoric civilization of Golasecca the early Iron Age.

From the second century we find the Romans, then, after the Lombard period, it passed into the hands of various noble families. Lake Maggiore was the fifteenth century, for three centuries, the fief of the Milanese family of Borromeo.

He then passed to assurgici and finally to the Savoy. The countries on the shores of Lake Orta instead were from the fourteenth to the eighteenth own statutes, to be part of the then House of Savoy.

The area is characterized in particular by beautiful villas and gardens, placed in the context of the great lake. 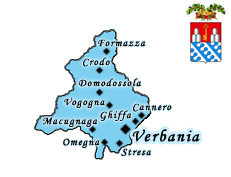 The provincial capital is located in the high Verbano and overlooks the Gulf Borromeo. It includes medieval buildings (like the church of St. Stephen), baroque palaces and villas of the XVIII-XIX century with great parks.

From the waterfront you can see the island of St. John, where there is the palace of the Borromeo '600, up to half of' 900 summer residence of Arturo Toscanini. On the promontory of Castagnola arise rather splendid villas surrounded by large gardens. 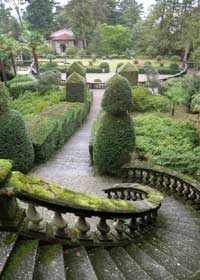 Worth seeing is the 'Oratory of San Remigio, an example of medieval building (XII sec.) With inside the remains of frescoes and paintings of the same period of the fifteenth century. Near the villa is the oratory S. Remigio, with features balconies in front, and the park, which is represented in the history of gardens: medieval from the garden to the orchard, the garden of Letizia to that of Sighs.

Other examples of Romanesque buildings are the church Madonna di Campagna, which contains works by Camillo Procaccini, Bernardino Lanino, Carlo Urbino and Aurelio Luini. Baroque architecture is instead Dugnani the palace, which now houses the Museum of History and Art of Verbano and Landscape, which collects various works of nineteenth-twentieth century by artists from Piedmont and Lombardy, the plaster casts of the sculptor Paul Troubetzkoy, sculptures by Arturo Martini and an archaeological collection (kits graves Roman-Celtic, The BC -I AD).

Do not miss a visit to Villa Taranto (XIX sec.) And its famous park, the largest and newest of the gardens of the Borromeo Gulf. Today seat of the prefecture, the villa was donated to the State by the owner, the Scotsman Neil McEacharn.

He put together one of the richest European collections of exotic species that were planted between 1931 and 1936. Today it counts the gardens contain 20,000 plant varieties. In the spring is very beautiful blooming tulips, while in summer and autumn that of dahlias.

The surroundings of Verbania

The province of Verbania is also enclosed by beautiful valleys: the Val Vigezzo, also called "Valley of Painters", both for its scenery and for the seven schools of painting which housed 800; Anzasca Valley, dominated by the Monte Rosa, whose major tourist sports center is Macugnaga; Formazza Valley, where we find the Cascata del Toce, 143 meters high, which was popular destination for famous people like Richard Wagner, and Gabriele D'Annunzio.

From the point of view of nature, not to mention the National Park of Val Grande, where nature has recovered its space, making this area the largest wilderness area in Italy and one of the most significant in Europe.
Among the towns to be visited we will include:

Macugnaga. It is one of the most famous resorts in the Alps, dominated by the rock walls of Mount Rosa and the center of the culture of the Walser. On foot or by chairlift you can reach the Belvedere, which offers a splendid view of Mount Rosa. You can also visit the Museum of the Mountain and the Walser museum and the Gold Mine of Guja. 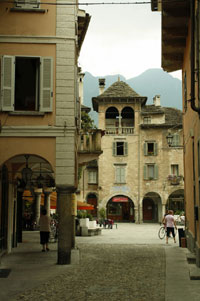 Domodossola. Located in the Val Vigezzo, it has the appearance of medieval village, for centuries crossing point for the Simplon Pass and the confluence of four valleys Bognanco, Divedro, Antigorio and Vigezzo. The market square, which is home to the traditional market every Saturday, is surrounded by houses of the '400-'500. Worth seeing is the church of SS. Gervasio and Protasio, of Romanesque origin, rebuilt in the '700, which retains a high relief of the XII-XIII century and a precious altar of Tanzio Varallo (XVII sec.).

The most beautiful building in the city is the Renaissance Silva palace, which houses a museum with collections of various kinds (archeology, paintings, armor, etc.). The ethnographic museum and natural science (with archaeological Etruscan-Roman, Egyptian, woodworks, costumes Ossola etc.) Are housed in another Renaissance palace, to S. Francesco, which incorporates parts of the church of San Francesco (XIV sec.).

At Domodossola is another sacred mountain Piedmont, the Sacro Monte Calvario , inserted in a nature reserve and also part of the heritage of 'Unesco. The complex dates back to the seventeenth century and consists of several buildings. Stands out among all the sanctuary of SS. Crucifix, which houses statues of the '600 and frescoes of the twentieth century.

The Mother House of the Institute of Charity was founded by Antonio Rosmini instead in the middle '800. Two other buildings are the oratory of the Madonna delle Grazie, which preserves precious frescoes of the '600 and statues of Charles John Giovanetti, and the Romanesque church of SS. Quirico and Giuditta, with frescoes of the fourteenth and fifteenth century.

The sacred mountain in the province of Verbano-Cusio-Ossola, part, like the others, the world heritage 'UNESCO, is the Sacred Mount of the Holy Trinity at Ghiffa, which offers a beautiful view of Lake Maggiore. The complex was built between the seventeenth and nineteenth century and consists of a church, three chapels and a porch with the Via Crucis. Like the other sacred mountains, it is surrounded by a nature reserve.

Another town on Lake Maggiore to visit is Stresa, the famous town of villeggiature that is located close to the Borromean Islands, admired by the famous and beautiful lakefront. Since 1700 began

be chosen as a holiday destination.

Especially at the beginning of the '900 villas and hotels were built here, many Art Nouveau, which still adorn the town. In Marconi Square, overlooking the lake, it stands the church of St. Ambrose, which houses statues of Francesco Somaini and paintings by Lombard painters of the '600. Near the church is the Villa Ducale, where Antonio Rosmini died and now houses the International Centre of Rosmini studies. Stresa is located at the Villa Pallavicino.

It is best known for his "park of flowers", which includes the botanical garden of international repute and is home to over 50 species of animals from every continent. From Stresa you can reach by boat the famous Borromean Islands. 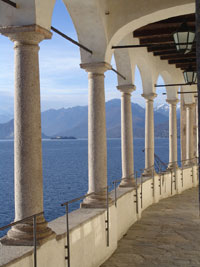 The Borromean Islands are named by the noble Milanese family of Borromeo and include the beautiful island, the island of fishermen, the island mother.

They are located at ca. 400 m. from the coast and are famous for their beautiful Italian gardens. Sull 'Isola Bella visiting the sumptuous palace Borromeo with its spectacular gardens of the Baroque period, which are divided into 10 terraces sloping down to the lake. The palace now houses the Museum of History and Art, which displays decorations, original furniture and paintings by various artists (including the Storm, Annibale Carracci, Giambattista Tiepolo etc.).

In addition, the gallery contains valuable tapestries Flemish tapestries of the seventeenth century. L 'Isle of fishermen houses a small village where they live 50 people living from fishing and tourism. The houses of the village have long balconies used for drying fish. The small hamlet unfolds in characteristic narrow alleyways that often lead to picturesque landscapes.

L 'Isola Madre is famous for its magnificent botanical garden, surveyed by the Royal Horticultural Society as one of the most beautiful in the world. It contains rare plants and exotic flowers as well as animals, including white peacocks and parrots. The garden surrounds the Borromeo another residence dating from the eighteenth century.

Omegna. This picturesque town is located on Lake Orta. In particular we should visit the baptistery and the collegiate church of S. Ambrogio. This dates back to the twelfth century, but was altered in later centuries. Romanesque recognize today only the facade and the bell tower. Inside you can see a beautiful wooden crucifix of the '400 and an altarpiece by Fermo Stella, the' 500.

In addition to the famous villas already mentioned, in the province of Verbania you can also find some beautiful castles, such as the Visconti Castle (XIV sec.) In Vogogna and the castles of Cannero (XVI sec.).

The province of Verbano-Cusio-Ossola Spa offers the possibility of cures. For example there are the thermal baths of Premia, in Val Formazza, those Bognaco, near Domodossola, with three sources of mineral waters rich in carbon dioxide, suitable for the treatment of disorders of the digestive system, liver. Finally, the thermal baths of Crodo, where thanks to its ferruginous waters and mineral-rich ideals can be cured diseases of the digestive and metabolic.