The district of Cuneo

In the province of Cuneo, there are some very interesting cities, like Saluzzo, Mondovi, Bra and Alba, but four Savoy residences, the Royal Castle of Racconigi Pollenzo Castle, the Castle and the Palace of Govone Valcasotto. To visit are also beautiful monumental complexes such as the Abbey of Staffarda shrine Vicoforte and some villas and castles. The province of Cuneo also offers the possibility to attend the famous spa towns, such as Vinadio. 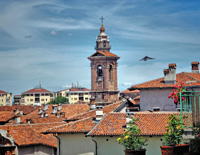 Saluzzo comes as a fortified citadel, dominated by the castle, which houses a circular tower, the only remaining parrte century construction, which was restored in the nineteenth century. Saluzzo was the capital of a marquis independent for more than 3 centuries. The city still retains parts of the medieval walls. In the narrow streets of downtown successive medieval and Renaissance buildings, plazas and arcades. Worth seeing is the cathedral-style late-Gothic, built in the late fifteenth century. Of particular interest is the altarpiece by Hans Clemens, located in the chapel of SS. Sacramento. The church of S. Giovanni, '300, has a great apse used as a funerary chapel of the Marquis. In the church are exhibited various fine frescoes and the tomb of Galeazzo Cavassa. Behind the altar is the tomb chapel of the Marquis, designed by Antoine Le Moiturier, which is an example of Gothic art Burgundy. We then come to the house Cavassa, mansion of 1400, today houses the Museo Civico di Casa Cavassa, where you can admire the magnificent rooms, such as that of Justice with the beautiful ceiling. Among the works of art are among others the "Labors of Hercules" and "the" Madonna of Mercy "by Hans Clemens. The Baroque period, however, are the Palazzo Comunale, the work of Francesco Gallo, with the Civic Tower (XV century), which offers a beautiful view over the city, the Church of Mercy, the beautiful ceilings that simulate architectural perspectives, and the chapel of the Immaculate Conception St. Bernardo. 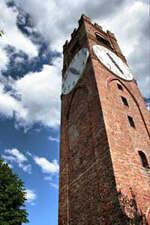 Mondovi is a medieval twelfth century the area of Monregalese. The town is situated on two levels: a lower part, to commercial and industrial property, and a tall, older, reached by a cable car, which in August hosts the exhibition of handicrafts. Cathedral dedicated to St. Donato is located on the square and is one of the most beautiful works of Francesco Gallo, architect of the 700 born in this town and author of some of Piedmont's most famous buildings (such as the sanctuary of Vicoforte). To visit the Belvedere, the garden at the center of which lies the mighty tower of Bressani of 1300, the church of S. Fiorenzo for its remarkable frescoes fifteenth and the church of S. Xavier called "The Mission", which contains valuable paintings by Andrea Pozzo. In Mondovi was created the "Park of Time", consisting of the Civic Tower, the Gardens of the Belvedere and the Palace of Justice complex. Through these three buildings of great historical and artistic path has been conceived of the concept of deepening "Time", which also contribute to the many sundials in the city. Mondovi is the birthplace of Giovanni Giolitti. 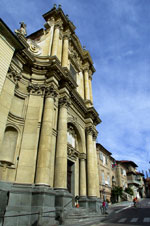 The city is located between the Roero hills and high plains Cuneo. The city is characterized by the Baroque style. You can visit the beautiful church of S. Chiara, built in Baroque style in the middle of the '700 architect Bernardo Vittone, who also designed the town hall, Palazzo Traversa, a Gothic building of the '300 divided by double-and decorated with clay. The building houses the Traverse Civic Museum of Archeology and Art History, a collection of Etruscan and Roman archaeological excavations made in the area of Pollentia (Pollenzo), an ancient Roman colony. Here have been unearthed from the ruins of a theater far six thousand seats and an amphitheater used by seventeen thousand spectators. A new section also houses paintings from the seventeenth to the twentieth century. Also interesting is the museum "Craven" natural history, national and international point of reference in the field of meteorology and ornithology.
Bra is one of the centers of trade and maturing of cheeses produced in Cuneo dairymen. It also produces cow's milk cheese DOP, the Bra.

The town lies at the heart of an area famous for its gourmet products, truffles and wine over all. Early Neolithic settlement, was then a Roman city, a free city in the Middle Ages, between the thirteenth and fourteenth was governed by different principles and finally came in the seventeenth among the possessions of Savoy. 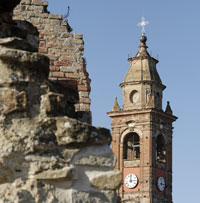 The old town, with its circular shape that follows the line of medieval walls, runs around the Piazza del Risorgimento, where we find the Palazzo Comunale and the Duomo. There stands the Tower artesian who along with other towers, like the tower and cut off the lovely home-cooked tower in Via Cavour, outlines the image of the old city. The Cathedral of S. Lorenzo was built at the end '400 Gothic-Lombard Romanesque building on an existing, which we can identify the parties is in the bell tower, which includes the oldest bell tower of the eleventh century, both in the interior pillars, also of the eleventh century. Attractions include the fine wooden choir of '500, the work of Bernardino Fossati. The Church of St. Dominic is the thirteenth-fourteenth century, in Gothic-Lombard. To see are outside, the beautiful splayed doorway, while inside there are interesting frescoes of '400-'500, the tomb of the fifteenth century Saracen Novelli and finally the sculptural group "The Cross", by Leonardo Bistoffi. Baroque period is instead the church of S. Mary Magdalene, which affects the undulating brick facade, unfinished, and, inside, frescoes and statues. Finally there is the Museo Civico "Federico Eusebio ", which contains archaeological Neolithic and Roman times.

Savoy residences in the province of Cuneo

Not far from Turin but in the province of Cuneo are four Savoy residences , Also belonging to the World Heritage 's UNESCO: Racconigi Royal Castle, the Castle of Pollenzo, Govone Castle and the Palace of Valcasotto.

Even near Cuneo do not miss:

In the province of Cuneo are finally also famous spas. Our recommendation:

The province of Cuneo