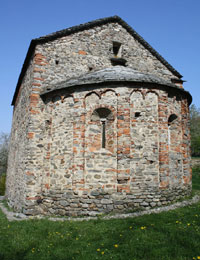 The Romanesque style is the style of medieval art. It shows different influences depending on the piedmont areas: east of Lombard, north of the Val d'Ossola and Val Sesia art German-speaking Switzerland, in the valleys of Susa and Aosta French art.
Along the way Francigena, one of the most important roads of the Middle Ages, via trade and pilgrimage from England through France arrived in Rome, there are some of the most interesting Romanesque monuments in the region.
In Piedmont, you can find small villages Romanesque almost intact, for example Cortemilia in the Langhe, Monferrato and Montechiaro Cortazzone. In larger towns and cities are visible but the massive interventions of later centuries, such as the Cathedral of St. Just to Susa (XI sec.), In the cathedral of Acqui and that of Ivrea (X-XI cent.).

We start from the province of Turin, where we find in Val Susa the famous architectural ensemble of the Sacra di San Michele (X sec.), L 'Benedictine abbey of St. Peter Novalesa (VIII sec.), The baptistery and the church of S. Lorenzo (VII cent.) Settimo Vittone, and finally to the beautiful church of S. John of Piobesi Torinese (X sec.), With its frescoes are inspired by art Ottonian. In Turin example of Romanesque art is the bell tower of St. Andrea della Consolata (XI sec.). 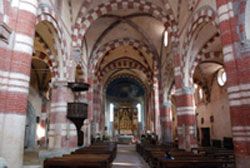 In the province of Cuneo a unique example of Romanesque architecture is the 'Abbey Staffarda (XII century). In Saluzzo While in the province of Vercelli worth visiting the churches S. And St. Mary of Naul Michele in Clivolo (VIII sec.) Borgo d'Ale and one of the most important monasteries of Piedmont 's Abbey of Saints Nazario and Celso (X sec.). Alexandria also located near the beautiful abbey of Santa Giustina di Sezzadio (VII cent.).
Asti and its province offer very many examples of Romanesque architecture. Asti you can visit the baptistery City (VII cent.) and the suggestive crypt of St Anastasio (VIII sec.). Nell'astigiano to Albugnano, there 's Abbey Vezzolano (VIII sec.) With its fine frescoes, the churches of San Lorenzo Montiglio (XII sec.) And San Secondo di Cortazzone (XI sec.).
Finally they are worth a visit the baptistery that of Biella and Novara (X sec.), with the Apocalypse, the Baptistery of Agrate Conturbia and Cureggio (X sec.) and the frescoes in the church of S. Michele Oleggio.
Examples of Romanesque sculpture can be seen in the cathedrals of crucifixes or the Abbey of Vercelli and Casale Staffarda.