The former Celtic and Ligurian village dates back to the third century. BC, was called "Taurasi". Following the conquest 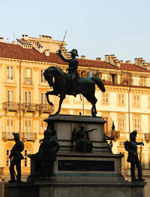 Roman in 28 BC was founded Augusta Taurinorum. In the eleventh century. the Savoy start to make the first claim on the city, but manages to build up in common. The city begins to expand economically only from the fourteenth century, under Amadeus VIII of Savoy and became the center of the merged provinces of Piedmont.
By the sixteenth century, thanks to the Treaty of Cateau-Cambresis, Turin became the capital of the Savoy dynasty. Were started work to be artistic and urbanistic elevate the city to its role as the Savoy capital. Were built the ramparts and the citadel, he started building the Contrada Nuova. The town began to assume its Baroque appearance. Are the years in which Carlo di Castellamonte designed, modeled in Paris, the new royal square, today's Piazza S. Carlo. The construction work of Carlo di Castellamonte was continued in the years later by Amedeo di Castellamonte and Guarino Guarini. In the eighteenth century the city was under siege by the French, the Austro-Piedmontese while striving to overcome. Turin became the capital of the kingdom of Sardinia and is built architectural works of Filippo Juvarra (such as the Basilica di Superga, or the Senate). Nell''800 Napoleon conquered the city, which demolished the walls, in whose place were placed large avenues.

Turin becomes under Carlo Alberto and Vittorio Emanuele II, the key cities of the Risorgimento. In 1861 became the capital of the new kingdom of Italy, then moved to Florence first, then to Rome.
At the turn of 900 lives a great boost to the city becomes a major economic and industrial capital of the world. In 1899 comes the Fiat Lingotto factory are constructed and Mirafiori. Following the Second World War The city sees a strong flow of migrants from southern Italy. Increasing population has led to a development messy construction.
Today Turin is characterized by its arcades That extend for 127 km, from its tree-lined avenues, from Savoy residences and palaces liberty. The Polytechnic of Turin is one of the largest in the world. The center of activities that revolve around research, industrial design, culture, art and tourism, and the cinema. 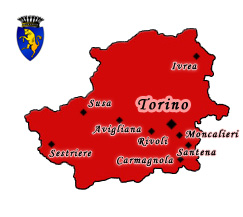 The province of Turin