A brief history of Novara

The city of Novara was probably founded by the Ligurians. The orthogonal structure, today still partly visible in the courses and Italy Cavallotti, it was given by the Romans, who came here in the first century. BC and called it the city as "Novaria".

After the dark period of the Lombard domination in the Middle Ages it became a free commune and was part of the Lombard League. Later he passed first under the control of the Visconti and then the Sforza. In '700 was occupied by the Savoy. In 1849 there took place the battle of Bicocca, where the Piedmontese army clashed with Austrian troops of Marshal Radetzky, who managed to occupy the city and put an end to hopes of independence for Lombardy. 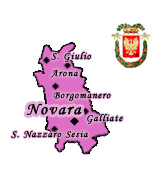 The appearance of the city is now mostly nineteenth century, dominated by the neo-classical style. Of the Middle Ages are few buildings: the Cathedral bell tower, cloister of the rectory, chapel of St. Siro, the Broletto, home Della Porta. The same for the Renaissance buildings: Castello Sforzesco, home Molina, St. Martin Church.

The Baptistery is the oldest building of the early Christian period (V sec.), Octagonal. The interior is marked with the innovative concept of the imperial Roman classrooms through semicircular and rectangular niches alternated. In the upper gallery one can admire beautiful frescoes of the XI century, which represent one of the most important pictorial cycles of pre-Romanesque painting in Piedmont.

The Cathedral is located on the central Piazza della Repubblica, surrounded by arcades. It is a neoclassical building designed by Alessandro Antonelli, who was however built on a previous Romanesque church of which we can still admire the bell tower survived. 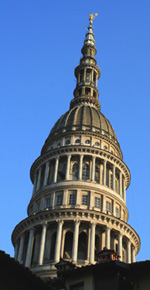 Inside you can admire works of art from various periods. First of all six Flemish tapestries of 1500, then works of Gaudenzio Ferrari and Lanino. In the presbytery there is a beautiful fragment of mosaic floor belonging to the ancient Romanesque church. In the adjacent oratory of San Siro you will find the "Stories of S. Siro," the twelfth century. The rectory houses finally the Museum of the lapidary Canonica.

Near the cathedral is one of the most important medieval buildings of the city, the Broletto, ancient medieval center of Novara. It is a complex of medieval buildings. It is composed of four civil willing wishbone overlooking the inner courtyard, belonging to different eras: the palace dell'Arengo or the City, the oldest (XIII century); the palace of the Guild (XIV-XV sec.); the Palazzo del Podesta (XIV sec.); the palace of Referendari (XIV-XV sec.). The Broletto is now home to three major museums: the Museum of Lapidary Broletto (conreperti from the early Christian church of S. Genesio), the Museum of Art and History Novara (in particular the archaeological section "Remo Fumagalli", with exhibits from prehistoric times to 'Roman times) and the Gallery of Modern Art "Paolo Giannoni" (with works by, among others, by Giovanni Fattori, Giovanni Segantini, Felice Casorati).

The symbol of the city of Novara, however, is the basilica of St. Gaudenzio (XVI sec.) with its dome pinochle, high 122 m in 800 designed by Alessandro Antonelli. Its Baroque bell tower is the work of Benedetto Alfieri. Inside interesting works by Moncalvo, Morazzone, Fiammenghino and Gaudenzio Ferrari, whose great altarpiece deserves special attention.

In Martyrs Square of Liberty, porticoed on three sides, there are the building Orelli or market, in the neoclassical style, the Visconti-Sforza Castle of the XIV-XV century, the Coccia Theatre (XIX sec.) And the barrier Albertine, made ​​up twin buildings dedicated to Carlo Alberto.

Baroque era are also the church of San Marco, built in 1600, which preserves beautiful wooden works and paintings, and the church of San Pietro to the Rosary. An example of a stately home is the 800 Bossi, one of the most important civil buildings of Antonelli.

The area around Novara 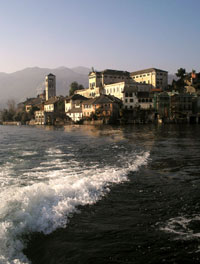 Orta San Giulio. It is a village on Lake Orta , from where boats leave to visit the Island of San Giulio. It is characterized by its narrow streets overlooked by old houses (as Giani house, home Maragoni etc.) And Baroque palaces. The Renaissance palace in the Community is located on the central square Mario Motta. In the church S. Maria Assunta (XV sec.) Are paintings of Procaccini, a pupil of Gaudenzio Ferrari and perhaps Morazzone.

The town is dominated by the Sacred Mount of Orta (XVI sec.), belonging, like the others, the World Heritage of 'Unesco. The complex includes 20 chapels designed to illustrate the life of St. Francis and a sanctuary. Chapels with frescoes illustrating the '600 and' 700-well with 376 terracotta statues painted scenes from the life of the saint. Among the artists who worked there were the Procaccini, the Fiammenghini, Morazzone, the sculptor Dionigi Bussola.

Orta Lake, located between the provinces of Novara and Verbano-Cusio-Ossola, stands a unique, beautiful island, the 'Island of San Giulio, reachable by boat from Orta S. Giulio. The island is home to the basilica of San Giulio, one of the most important examples of Romanesque architecture in Piedmont.

Tradition has it that the church was founded by St. Giulio in the fourth century and then restored in the Middle Ages. The interior hides valuable frescoes from the XV-XVI century paintings, among others, Giorgio Bonola and Francesco del Cairo. Also to be admired is the medieval pulpit in black marble Oira and fresco Martyrdom of St. Lorenzo, the oldest church (XIV sec.).

On the trail of the Middle Ages and you can visit the Romanesque to Borgomanero the Romanesque church of S. Leonardo, the twelfth century, which preserves precious frescoes of the '200. A Romagnano Sesia, there is the Praetorian, a preserved part of the medieval castle (XIII sec.), Built when Novara had a common.

In town there is also the parish church S. Silano, which houses an early Christian sarcophagus (V sec.) And works by Bernardino Lanino. Another building to see is the Romanesque Baptistery of Agrate Conturbia , octagonal, whose construction probably dates back to 930. A S. Nazzaro Sesia is the 'Abbey S. Nazzaro. Its foundation dates back to the eleventh century, but was rebuilt in the '400.

The church has a mixture of Romanesque and Gothic styles: the facade in Gothic-Lombard, the rose window, the portico and the massive Romanesque bell tower. Inside there are frescoes of the '400. Finally in Massino Visconti are the Castello Visconti d'Aragona, fortified building dating from the twelfth century, and the Romanesque church of San Michele, with its leaning tower. 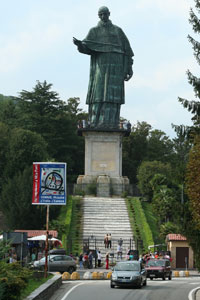 Another town of interest is Arona. It has ancient origins and has been inhabited since prehistoric times, as shown by some archaeological finds in the Archaeological Museum. A few meters from Lake Maggiore, in the center of Arona find Villa Ponti, with its magnificent garden. The villa dates back to the '700 and is the birthplace of Gian Giacomo Ponti, professor of electronics at the Politecnico di Torino, a pupil of the great scientist Thomas Edison.

A major attraction for visitors is S. Carlone, a colossal statue (high more than 20 m., Placed on a granite base of about 11 m.) Erected in memory of St. Charles Borromeo. Built in the seventeenth century by order of Federico Borromeo, cousin of the saint, was performed on a design by Giovanni Battista Crespi, known as Cerano.

This is the second statue in the world by height, after the Statue of Liberty in New York. Its surface reaches 500 square meters. You can visit it inside, using stairs. Else tied to San Carlo Borromeo is the Rocca Borromeo, which was in ancient times, with the Rocca di Angera (VA), one of the main points of strategic control of Lake Maggiore.

It founded in Lombard times around a thousand. San Carlo Borromeo was born here in 1538. Not far from Arone is the Natural Park of Lagoni Mercurago.

Castle visconteso-Sforza (XV sec.) Of Galliate, one of the largest in Piedmont, surrounded by a moat, a square with four corner towers protruding.